And now for something a little different (yet still have a little bit to do with ukes!)...

So tonight I took my family to a local mall. While there, I went into a store there called "Tomodachi", which sells mainly Japanese toys and collectibles. The Japanese love "candy toys", which are these little boxes containing randomly inserted little models of various subjects and usually a piece of candy or gum. The subject matter of these "candy toys" range from the usual Japanese Animation stuff such as Dragon Ball Z and Gundam, to some really bizarre stuff such as miniature furniture and food models. This store sells a lot of these "candy toys" and this time I decided to check them out while pushing my baby son's stroller through the small store. Since the Japanese love to travel to Hawaii, I guess it wasn't a shock to see this: 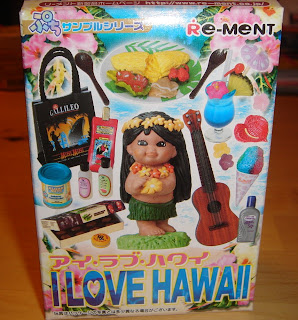 You probably didn't have to guess that the ukulele on the front of this box immediately caught my eyes (yes, sad but true...). Knowing what these boxes are, I knew the ukulele was probably one of the random items packaged inside the box. I grabbed it and turned it over, and sure enough, there are 9 different sets of "Hawaii" items that you can get: 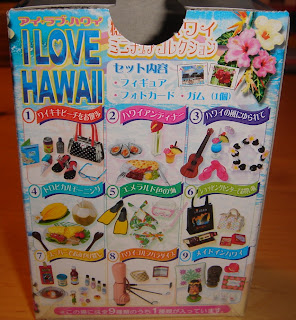 As you can see, set 3 contained the mini ukulele I so very much wanted (I guess UAS knows no size limitations or make any distinctions between real and fake). Now, being full of items imported to the USA from Japan, everything in the store carried fairly ridiculous prices. This little box, which measures about 4 inches tall, costs $4.50. So I wasn't going to get a bunch of boxes in hopes of scoring the mini-uke. Fortunately (or unfortunately) for me, there were only two boxes left. I thought about just letting it go, but as I left the store, I was like "what the heck, I'll just get one and see what I got". I was thinking as long as I didn't get set 8 (golf clubs...that's supposed to remind me of Hawaii???) I'd be OK with it. So I grabbed one box, paid for it, and left (OK, so I also grabbed another box containing an insanely detailed 1/24 Suzuki racing motorcycle).

After getting to my car, I opened the "I Love Hawaii" box to see what I got, not really expecting to get set 3 with the mini-uke. Lo and behold, I did get set 3! (This is when you get to say "what a nerd!") 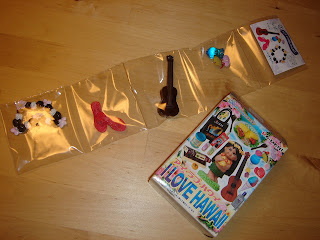 As you can see, it came with a few other things other than the mini-ukulele. There's a card that tells you what they are: 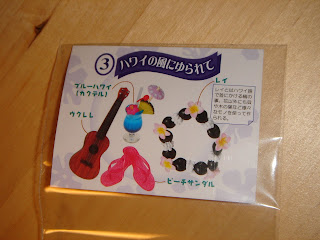 Besides the ukulele, we have a glass of "Blue Hawaii" cocktail, a pair of Beach Sandals, and a Lei. So I have absolutely no interest in the other 3 items (especially not the pink sandals!), but hey, they are pretty cute. The mini-ukulele probably was modeled after a Martin, but being so small, the headstock actually looks more like a Gibson. Whatever. It's actually looks pretty decent, and it has 4 strings (painted on a piece of clear plastic) and 4 tuning pegs. Pretty accurate representation of the ukulele if you ask me.

So just how small is this little guy? Remember the Pocket uke? 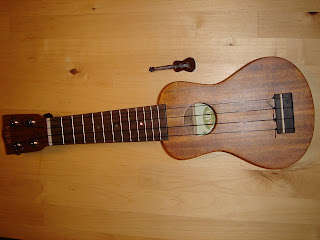 It's the size of the Pocket uke's bridge! (for those of you who have sharp eyes, yes, the Pocket uke developed some seam separation at the soundboard. It works fine, but I'll need to try to do something about it at some point, I think.) 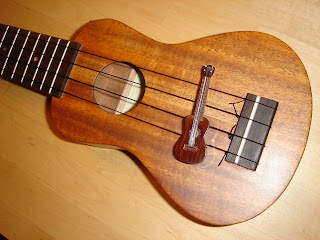 I think this just might be the smallest model of the ukulele ever. I mean, any smaller you might not be able to see it!

So there you have it. Something totally out of the left field. I guess I was pretty lucky to have scored this fake mini-uke. Too bad I don't have such luck with lottery tickets...(like I have a 1 in 9 chance of winning the lottery...) But now that I have this little fake ukulele, what do I do with it??? Hmmm....I think I know just the guy to give it to: 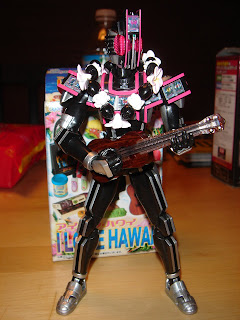 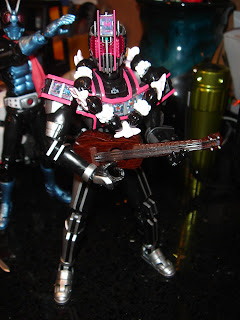 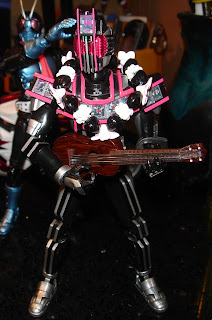 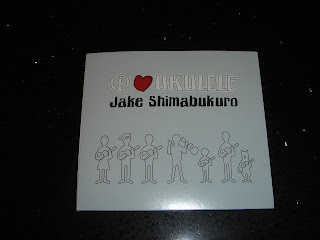 It's no secret that I'm a big Jake Shimabukuro fan, so when I learned that I could pre-order his upcoming CD, titled Peace, Love, Ukulele, I did just that.

The pre-order indicated that the CD would be released on January 3rd, but I actually received the CD on that date, so it was a pleasant surprise.

I've only listened to the CD a couple of times so far in my car (where I do most of my music listening), but I do like it. There are 2 tracks worth of Bohemian Rhapsody, one recorded in studio and one recorded live. I thought it's a cool arrangement. A few other songs got studio recordings after being released on the Live album from a couple of years ago. There are not a ton of new materials but most are pretty fresh.

Anyway, I'm not much of a reviewer of albums, so I'll just share a few more pictures of it. If you're a Jake Shimabukuro fan, you've probably already bought this in the form of the CD or MP3 from iTunes. If you're just discovering the ukulele and find Jake's music to your liking, this is a good listen.

Back of the CD 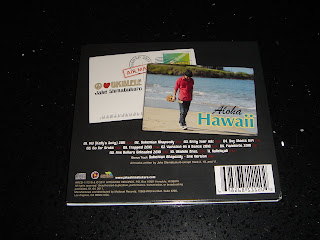 Inside of the case 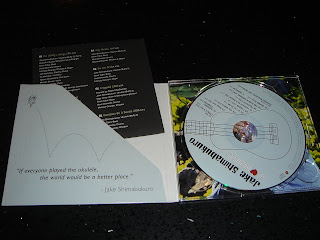 Folded insert. On one side it has a picture of Jake holding a Kamaka soprano (he doesn't play sopranos!) and a couple of chord charts. 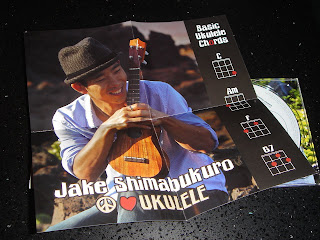 Other side of the insert with track listing and thank you's. 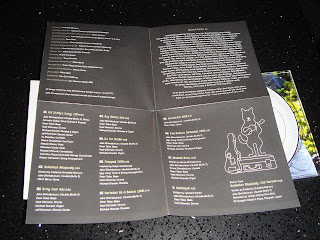 Which uke should I bring on my next trip to Oahu???

What's the maximum you'd spend on a ukulele case for your best uke?

If you could steal one of my ukes, which one would it be???

How curly do you like your koa? (preferably on a uke)

What's the maximum number of ukes a perfectly sane person should have???

Poll: How often do you play the ukulele???

Poll: Which guitar company's approach to ukes do you prefer???

Poll: The new basic Collings concert uke (UC-1) sells for about $1k, your reaction is: